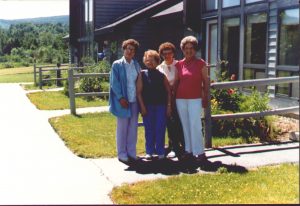 Edith Delia  was born in Burlington on May 19, 1902. She is the second child born to Narcisse (Nelson) and Delina (Bouchard) Chagnon.

Edith  died on November 22, 1997 at the age of 97. She died in Okaloosa, Florida and is buried in New Mount Calvary Cemetery in Burlington, Vermont with her husband Herbie.