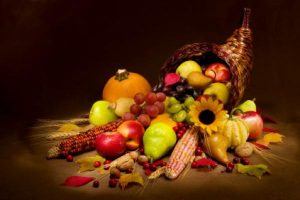 This year, Thanksgiving will be on Thursday, November 28. So why do we celebrate Thanksgiving every year? When and how did Thanksgiving first become a National Holiday?  And what did they eat?  Most of us were told how the Indians help teach the Pilgrims how to grow corn, along with other skills like hunting, fishing and that they celebrated their first harvest (which is known as the First Thanksgiving) with sharing a feast with Indians and giving thanks to God. Well, there is a little more to this story.

Why do We Celebrate Thanksgiving?

So, here is the how, what, when, and why Thanksgiving is a National Holiday. 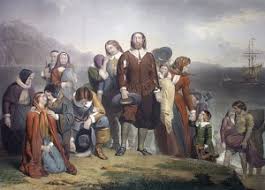 In September 1620, a small ship called the Mayflower left Plymouth, England, carrying 102 passengers that were either lured by the promise of prosperity, land ownership and seeking a place where they could freely practice their religious faith. They dropped anchor 66 days later near the tip of Cape Cod, which was north of their intended destination at the mouth of the Hudson River. They crossed the Massachusetts Bay and began working on establishing a village.

Their first winter was quite difficult. Most of the colonists remained on board the ship, where they suffered from exposure, scurvy, and outbreaks of contagious disease. Only about half of the Mayflower’s original passengers and crew lived to see their first New England spring. 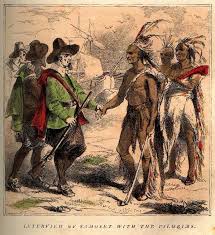 In March, the remaining settlers moved ashore, where they received an interesting visit from an Abenaki Indian who greeted them in English. Several days later, he returned with another Native American called Squanto, who was a member of the Pawtuxet tribe. Squanto had been kidnapped by an English sea captain and sold into slavery before he was able to escape to London and return to his homeland on an exploratory expedition. Squanto taught the Pilgrims, how to cultivate corn, extract sap from maple trees, catch fish in the rivers and avoid poisonous plants. He also helped the settlers forge an alliance with the Wampanoag, a local tribe, which would endure for more than 50 years.

The Native Americans and the European settlers did not always get along. They had a long and bloody history of conflict that resulted in tens of thousands of deaths. Since 1970, people have gathered on the day designated as Thanksgiving at the top of Cole’s Hill, which overlooks Plymouth Rock, to commemorate a “National Day of Mourning.” 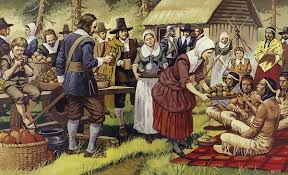 In November 1621, after the Pilgrims’ first corn harvest proved successful, Governor William Bradford organized a celebratory feast and invited some of the settler’s Native American allies, including the Wampanoag chief Massasoit. 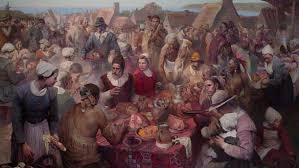 Historians have suggested that the food that was prepared was most likely made using traditional Native American spices and cooking methods. Because the Pilgrims had no known oven and the Mayflower’s sugar supply most likely had dwindled by the fall of 1621, the meal would have not featured pies, cakes or other desserts, which have become a hallmark of today’s’ Thanksgiving celebrations.

How did Thanksgiving Become a National Holiday?

During the American Revolution, the Continental Congress had one or more days of thanksgiving a year, and in 1789 George Washington issued the first Thanksgiving proclamation by the national government of the United States. In his proclamation, he called upon Americans to express their gratitude for the conclusion to the country’s war of independence and the successful ratification of the U.S. Constitution. Presidents John Adams and James Madison also designated days of thanks during their presidencies.

In 1817, New York became the first of several states to officially adopt an annual Thanksgiving holiday. However, each celebrated it on a different day and the American South remained largely unfamiliar with the tradition.

In 1827, Sarah Josepha Hale, the noted magazine editor, prolific writer, and author of the nursery rhyme “Mary Had a Little Lamb” launched a campaign to establish Thanksgiving as a national holiday. For 36 years, she published numerous editorials and sent scores of letters to governors, senators, presidents, and other politicians, earning her the nickname the “Mother of Thanksgiving.” 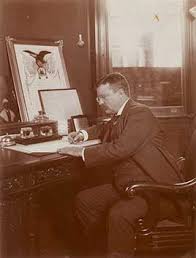 Civil War, Abraham Lincoln finally granted her request in a proclamation entreating all Americans to ask God to “commend to his tender care all those who have become widows, orphans, mourners or sufferers in the lamentable civil strife” and to “heal the wounds of the nation.” He scheduled Thanksgiving for the final Thursday in November, and it was celebrated on that day every year until 1939 when  Franklin D. Roosevelt decided to move the holiday up a week in an attempt to spur retail sales during the Great Depression. Roosevelt’s plan, known derisively as Franksgiving, was met with opposition, and in 1941 the president reluctantly signed a bill making Thanksgiving the fourth Thursday in November.

What are Thanksgiving Traditions?

In many American households, the Thanksgiving celebration has lost much of its religious significance and now centers mainly around the cooking and sharing a bountiful meal with family and friends. Turkey, a Thanksgiving staple so ubiquitous it has become all but synonymous with the holiday, mainly due to marketing. It is not known for sure if the Turkey had been a part of the Pilgrims feast in 1621. According to the Nation Turkey 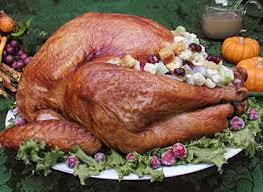 Federation, today, nearly 90 percent of Americans eat turkey roasted, baked or deep-fried on Thanksgiving, along with other traditional foods such as stuffing, mashed potatoes, cranberry sauce, and pumpkin pie.

Volunteering is a common Thanksgiving Day activity, and communities often hold food drives and host free dinners for the less fortunate. Parades are an integral part of the holiday in cities and towns across the United States.

Since 1924, Macy’s department store has presented the New York City’s Thanksgiving Day parade, which is the largest and most famous of parades.

Beginning in the mid-20th century and perhaps even earlier, the president of the United States has “pardoned” at least one or two Thanksgiving turkeys each year, sparing the birds from slaughter and sending them to a farm for retirement. Several U.S. governors also perform the annual turkey pardoning ritual.

How do You Celebrate Thanksgiving? 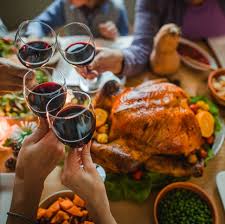 What were some traditions that your parents did at Thanksgiving? Do you still carry on those traditions? What are your plans for Thanksgiving? Are you spending it with family, friends, cooking, eating or maybe B+lack Friday shopping? Do you have to work, or planning to watch a parade? Maybe you are volunteering at a soup kitchen and giving canned foods for a local food drive? Whatever you have planned, take time to remember how and why this day of Thanksgiving came about and give thanks to those who have gone before you. Wishing you all a bountiful Happy Thanksgiving.

Your cart is empty
Visit The Shop